Heterobasidion annosum, the root and butt rot fungus infecting Norway spruce and Scots pine, causes butt rot in spruce and resinosis in pine. H. annosum occurs in trees of all ages, but it is most common in sawlog size trees. Butt rot can be seen as rotting of the stem in spruce. In pine the fungus causes resin to collect in the roots with the consequence that the trees fall or die where they stand.

Root and butt rot impairs forest health and causes forest owners and industry losses as wood quality reduces. Rot-damaged wood is not acceptable as sawn timber; instead, it is used as raw material for chemical pulp or in energy generation. An important aspect in the fight to control H. annosum is to reduce the damage already in infected areas and also to prevent the spread of the fungus to new areas.

Root and butt rot in spruce caused by Heterobasidion annosum.

The fungus causing root and butt  rot  spreads via air-borne spores,  which are abundant in the forest during the summer period. Having landed on freshly cut stumps, the spores germinate and start producing hyphae which penetrate into the stump and the root system. Moreover, the annosus rot fungus is able to spread from infected trees into healthy trees via roots  and from infected stumps into seedlings on the regeneration site. 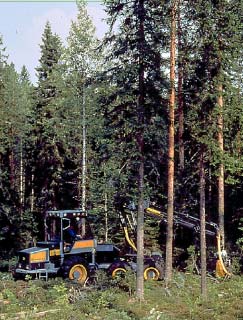 in which the proportion of spruce exceeds 50% of the stand volume:
– Always in conjunction with thinning
– In final felling of spruce unless there is a change of tree species when renewing the stand

Stump treatment is not required

– In deciduous trees
– Tending of young stands when the average stand dbh is less than 10 cmIn final fellings when there is a change in tree species to deciduous trees and when the area felled does not border on coniferous stands.
– On peatland forest sites

Here’s how to do the Rotstop treatment
– Treat the stumps at felling or within 3 hours from felling
– When applying the treatment manually, use a backpack sprayer or a spray bottle and spray a layer of the suspension about 1 mm thick evenly over the stump surface
– Average in mechanized treatment is 2 litres of prepared Rotstop suspension per sq. metre of stump surface